No one ever told me that grief felt so like fear.

To describe how it feels to learn your child’s death is imminent is far beyond my abilities. To say that it completely alters the fabric of your being and your perceptions is a clumsy understatement. To live with the knowledge that there’s an immense possibility that you will exist without your child is inconceivable. But it’s important that I try to describe it. Not just for myself, but for the many parents who live with this burden.

I didn’t really accept the full implications of India’s prognosis until Mark and I visited Roger’s House this spring. (For those outside Ottawa, Roger’s House offers respite, palliative care and end of life care for children and teenagers and is located just a minute’s walk outside The Children’s Hospital of Eastern Ontario.) The day we went there, the house was quiet, but I later found out this was unusual. Nevertheless I remember feeling as though I should whisper. As we entered we were greeted by a friendly receptionist who led us to a family area that featured a spacious kitchen with all the mod cons. The room reminded me of a show room in a model home or a funeral home lounge.  As someone who’s spent a lot of time in theatres, I understood a great deal of effort had been made to create a comfortable atmosphere. Perhaps because of this I felt a surge of fear. The receptionist gave us coffee in large blue mugs. While we waited for the doctor and nurse in charge of the meeting, I watched a woman cooking in the kitchen, trying to decide whether she was a volunteer or a parent. Everywhere I looked there seemed to be boxes of Kleenex.

At length we were joined by the doctor and nurse. The meeting didn’t start off well. They didn’t know why we were there and assumed it was to make a plan for respite care. The doctor had only glanced at India’s file so we were asked to give him a summation of her illness and prognosis. I always find this an ordeal. It never stops being painful. Finally, the doctor approached the idea of end of life care.  He was kind but it bothered me he used the word story as a euphemism for death. I recall him saying something like “when the time comes your family will be able to choose the ending of India’s story”. As a writer I felt this statement was questionable. When I write a story I decide how it ends. If I were to write India’s story I could control every aspect of it, settle on a happy ending, where she’s cured and runs off to travel Asia with the guy of her dreams. In reality I’m powerless. I can’t change the progression of her disease and I certainly won’t be able to fight death’s hold.

To be fair, there are many people who prefer euphemisms. And I’m aware the doctor’s job is not an easy one and that he’s doing his best. On the other hand, this field of medicine is his speciality and he’s chosen to devote himself to it. Mark and I by contrast, are definitely not there by choice. Perhaps his hope is by discussing death in this manner people are persuaded that they have some control. I don’t know. I’m sure there are those who find this comforting but it made me feel manipulated. Sometime during the interview I began to cry. I remember being handed the Kleenex box by the nurse.

The doctor excused himself and the nurse took us on the tour. She was more emotionally available. Several times I was comforted by remarks she made. In particular, I remember her stroking my shoulder and saying, “This is not the way it’s supposed to be, is it?”

The rest of the house was more colourful than the lounge. Artwork by patients covered the hall walls. Though I couldn’t help but wonder how many of the young artists were now deceased. A cheerful girl of about two was playing with a volunteer in the playroom. I remember looking at her thinking, no, not her as well… This started me crying again. I couldn’t help but think of India at this age, how she was constantly climbing everything.

Upstairs we looked at the bedrooms. Some were designed for teenagers and groups of kids, others had kitchenettes for families. Everywhere I looked there were play-stations and DVD’s. There was a nurse’s station in the centre of the hallway. A mother passed us carrying a baby in her arms. Once more I found myself worrying why they were there.

We made our good-byes and headed across the parking lot towards CHEO to meet India’s neurologist. The May sky was very blue. Suddenly my legs started to wobble and I thought I was going to fall on my knees. The physicality of my sadness surprised me. I’d never believed those scenes in movies when people fell to their knees in grief. I began to sob loudly and gulp for breath Eventually with Mark’s help I pulled myself together. I crept to the hospital like an old lady because I couldn’t manage my regular pace.

The realization that I was grieving began that day. I think it was being forced to imagine the intimate details of my daughter’s death.  Even if I were to wake up tomorrow and learn that India could be cured that day would forever be etched in my cells. Since then my pain has become physical. Frequently I feel as though God, or at least, that God of my childhood, the old man with the white beard, has reached his hands into my chest and is slowly pressing down on my lungs. The weight is unbearable. As if everything I own has been piled on top of me. I wonder how one can be so empty and heavy at the same time.

I understand people don’t always know what to say to me. Several friends have told me they’re terrified of saying the wrong thing and accidentally hurting me. Hell, I don’t even know what to say to myself. Often I can’t even believe it. How did I go from watching my daughter fence to holding her hand during a terrifying hallucination? Like the tight rope walker, Nik Wallenda staring down at the furious water of Niagara Falls, I’m cloaked in mist, only able to concentrate on one slow step at the time. I don’t dare look down.

Generally I try to concentrate on the intention behind people’s words. Though platitudes can be tiring. They may be well-meaning but often they’re simply not true. Not long ago, an acquaintance said to me, “God gives us the children we deserve.” I didn’t know how to respond. In the end, I just nodded. I’ve been alive long enough to know there are just situations that are hard to emotionally navigate and that people can only do their best. If someone is sincere in what they say I can overlook any accidental faux pas. I’m always grateful when people tell me that they are thinking or praying for India or that they’re there to listen. Recently I was uplifted by a message from a friend that simply said courage. Still it’s the ordinary events that cause me the most sadness such as a group of teenage girls walking down Wellington Avenue on a Saturday afternoon, carefree and for the most part unaware of their good fortune.

Not long ago. I was stuck in my doctor’s waiting room with a mother and her baby girl. The mother was bouncing the baby on her knee and singing. I tried to distract myself by playing with my phone but as determined as I was it didn’t help. It felt as though the mother’s singing was growing louder and louder. I willed myself not to cry. In the past, I probably would have admired the baby but all I wanted was that mother to stop singing.  Occasionally it can feel as if I’m walking about wearing my skin over my clothes.

People have been incredibly kind to me and my family. Our social worker tells me this isn’t always the case. Many of her clients feel abandoned by their friends. I don’t know how I’d survive without support. Though this hasn’t been without its challenges. I’m very independent and at first when people asked me if they could help I would politely decline their offers. I didn’t want them to feel I was a burden. I still don’t. I know that our family is not the only one suffering. In fact, I find these days I’m more aware of other’s people’s loss. This is because I know first hand what it’s like to see those you love in pain.

I worry that if my daughter dies I won’t be able to recover. I know I’m strong but I just can’t imagine a future without her. Nor do I want to. Frequently I feel guilty that it’s her that’s ill not me. I wish I could take her place. I’ve been reading a lot of blogs by parents who have lost their children. Many of them share my sentiments. One of the consistent messages seems to be is that they wish their friends would talk about their deceased children. I worry about that too. I would hate India to be forgotten.

The decision to begin the campaign for One Strong Girl for both Mark and I was difficult. For six years we did our best to handle this situation. In the end we knew we had to spread the word for India’s sake. We just couldn’t give up. I never expected such an outpouring of generosity. It doesn’t change the sadness I feel about India’s illness, but it does comfort me. I’m tremendously grateful. These days I understand there’s a strength in learning how to accept help. I don’t know how the future will unfold—currently I’m hoping for the best but preparing for the worst—but when I do envision it, the one consistent thought that sustains me is that I want to take an active role in supporting those in need. I can’t think of any better way to honour India. 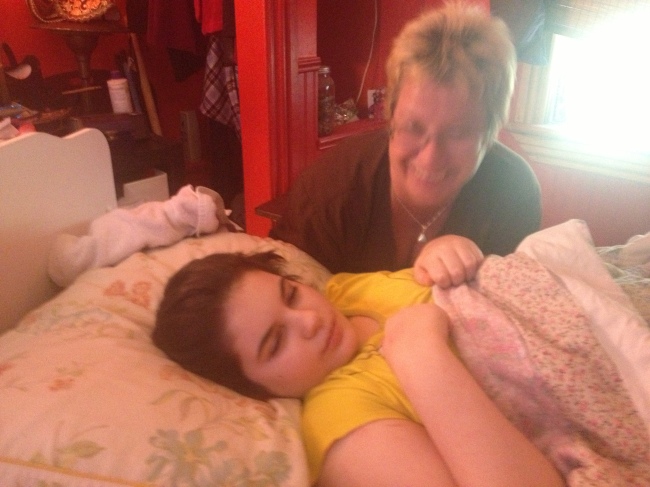 India today, with one of her healthcare workers 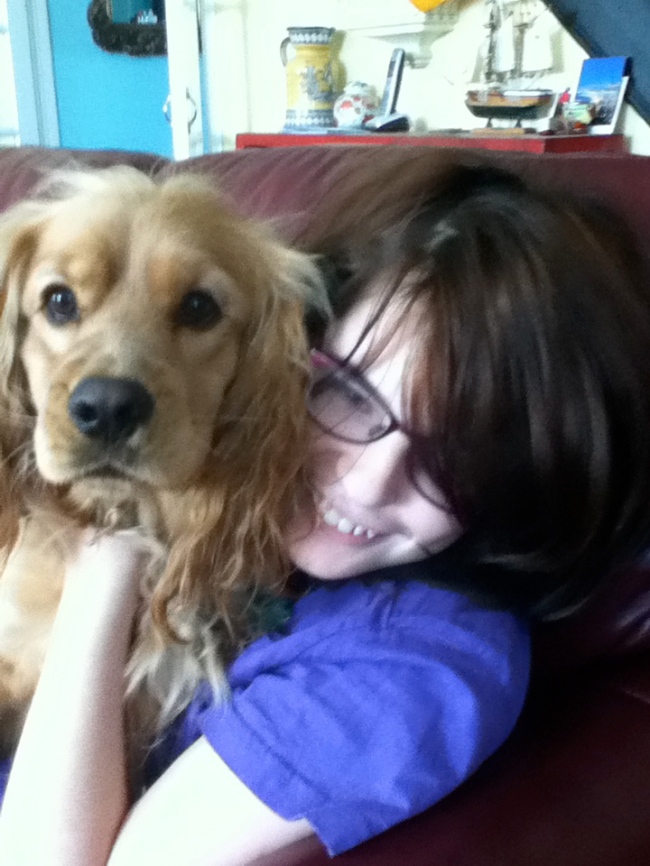 A much happier day with her beloved dog, Dimitri